Hot Wheels has gone all in on its Mario Kart collection, with a variety of creative play sets and cars available for purchase. Now they’re bringing one of the series’ most iconic tracks to life: Rainbow Road. 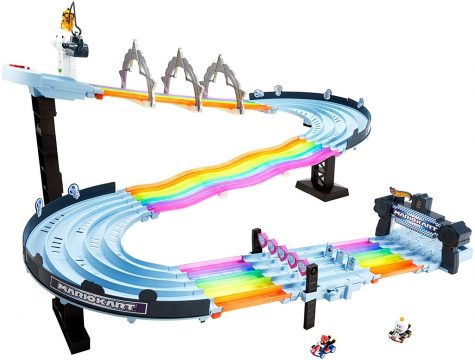 The listing went up quietly for preorder on Amazon late last week and appears to have already sold out. The set is pretty massive and can be configured in either an s-curve or a straight track. There are five lanes, item “boxes” that the cars can hit to trigger “items” on the track, and battery-powered features like Lakitu’s traffic lights and what appears to be perhaps a counter at the end of the raceway that indicates what place each car finishes the race in. The play set comes with King Boo and Mario.

Rainbow Road releases on May 29 and will cost a pretty penny at $119.99. This is a seriously cool recreation of one of the most notorious and difficult tracks in any Mario Kart game that both collectors and kids are probably going to love. Will you try to get your hands on a set when it comes out?