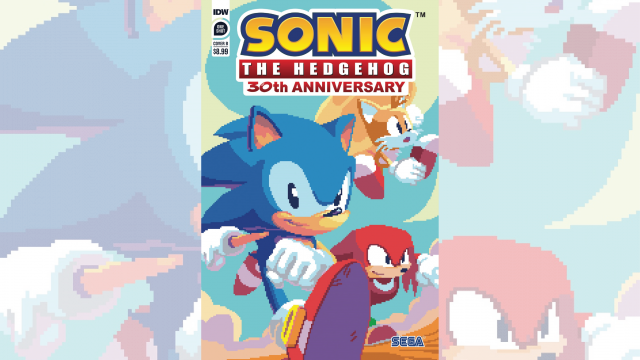 Rejoice Sonic comic fans, as IDW and Sega of America are pulling out all the stops for the Blue Blur’s 30th anniversary. This June, fans will be able to read Sonic the Hedgehog 30th Anniversary Special, a three-story compilation that honors the character’s three decades as a video game and pop culture icon. The three stories to read are: Seasons of Chaos, Dr. Eggman’s Birthday, and Sonic Learns to Drive. The issue is said to be launching with multiple variant covers to collect.

Here’s how IDW breaks down the talent lined up for the upcoming milestone issue:

For this spectacular tribute comic, IDW has tapped Gale Galligan, known for her illustration work on The Babysitters Club, along with Justin, Travis and Griffin McElroy, podcasters recognizable from The Adventure Zone and the wildly popular My Brother, My Brother, and Me. This group of newcomers will be contributing their first-ever Sonic adventures alongside fan-favorite and longtime scribe Ian Flynn and artists Mauro Fonseca, Reggie Graham, Aaron Hammerstrom and Thomas Rothlisberger.

Adding to the fun is a Free Comic Book Day 2021 Sonic 30th anniversary comic, as well. FCBD is on August 14 this year and promises to bring its own version of this comic to fans. It’s unclear what the difference will be between the two issues; it seems that the June version will have the Elroy brothers’ and Flynn’s stories, while the free book will only have Galligan’s (plus some extras, likely reprints). Here’s the official description:

Celebrating 30 years of the world’s fastest hedgehog! There’s no telling how Sonic will react when he sees the results of Amy Rose’s new hobby-she’s been making tell-all comics about her adventures with Sonic, Miles “Tails” Prower, and their friends! New York Times bestselling author Gale Galligan (The Baby-Sitters Club graphic novels) spills the beans! Plus, fun extras to catch readers up on Sonic’s ongoing adventures, on the road to issue 50!
Sonics 30th anniversary celebration will be a huge priority for IDW and Sega this year!

We’ve reached out to IDW just to clarify, but this seems to be how things will shake out. For those who really want to get into the Sonic fun, there will be a hardcover edition of this comic dubbed Sonic the Hedgehog 30th Anniversary Celebration: The Deluxe Edition that launches on October 5. It contains everything from the standard version of the book plus “an additional story by Gale Galligan, a cover gallery, a ‘From Script to Comic’ feature and much more.” It will retail for $19.99.

Whew! That’s a lot to take in, but we think we’ve broken it down as best we can. If you’d like further clarification or just to simply rejoice in Sonic turning 30, tell us in the comments or on social media!