Long time no see! The last time I had an opportunity to speak to you I introduced the latest Exor Studios project, The Riftbreaker. Our latest game is a mix of a base-builder, survival, and action-RPG. You play the role of Captain Ashley Nowak, a member of the elite Riftbreaker formation. Armed with a powerful mecha-suit, she travels to a distant planet called Galatea 37. Her task is to prepare this new world for human colonization.

We’re very excited to announce that The Riftbreaker will be available Day One for Xbox consoles and Windows PCs. The game will be released this Fall, simultaneously on all platforms. We prepared a special gameplay overview video with our commentary for you. It shows the game in action and also describes which of the amazing Xbox features we got to use. You can watch the video right here:

On top of that, you can already download and play The Riftbreaker: Prologue on Windows 10 PC from the Windows Store. This free demo allows you to experience the events taking place before the story campaign of the main game. Explore an entirely new world, gather resources, build up a base, and defend yourself from thousands of alien creatures. Or just take the scenic route and do whatever you want – the choice is yours!

We can’t wait to let you play the full version of The Riftbreaker with Xbox Game Pass on Day One for Xbox consoles and Windows PCs this Fall. 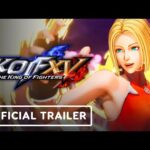